Description: George Soros, a Hungarian-American Jewish billionaire, philanthropist and Holocaust survivor, is a frequent target of antisemitic conspiracy theories about his funding of protests. In the days following the murder of George Floyd and the eruption of nationwide protests against police brutality and systemic racism, conspiracies about Soros quickly gained traction on social media. ADL’s researchers documented a significant rise in the number of tweets about Soros, soaring from 20,000 on March 26 to more than 500,000 by March 30—a 2400% increase. ADL explained that “the vast majority of these tweets allege that Soros is paying protestors to riot, and that he funds antifa. A smaller number claim that he plans to radicalize African Americans in order to undermine society and enable the globalist takeover of America, while some go so far as to claim that George Floyd’s death was actually a false flag deployed by Soros in order to precipitate the current crisis.” Verified accounts belonging to right-wing personalities with large online followings promoted these conspiracies, including Candace Owens, Bill Mitchell and James Woods.

Soros conspiracies, some of which include explicitly antisemitic language, are common across mainstream social media platforms like Twitter and Facebook, and sites popular among extremists, such as 4chan and 8kun. Accusations about Soros often overlap with other disinformation. Soros has been tied to the specific claim about busloads of antifa protesters traveling across state lines to cause unrest, including in a manipulated photograph—debunked by The Associated Press in early June—showing two buses labeled “Soros Riot Dance Squad.” Both Soros and his Open Society Foundations were also named on a fake flier advertising paid “professional anarchist” jobs—one of the many fliers with fake or incendiary language which have circulated online during the recent protests. 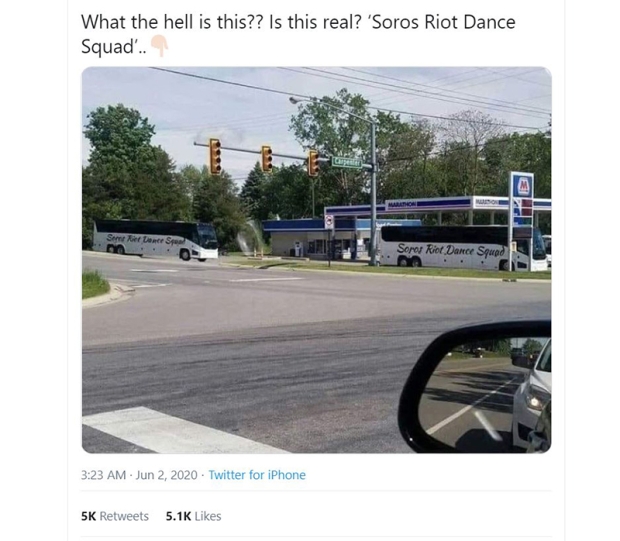 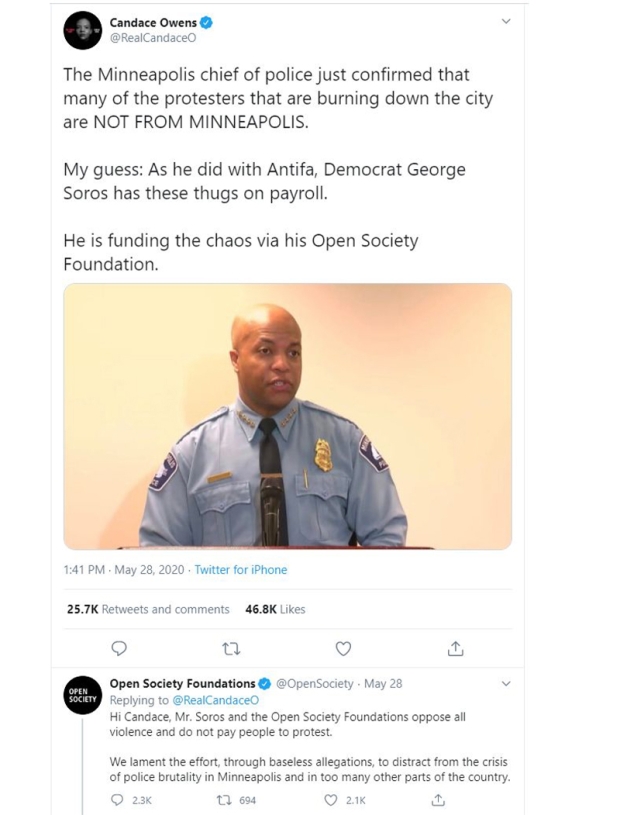